We got up early because we knew the day’s itinerary would be a game of hop-scotch. I had drawn up a semi-elaborate plan to bypass the ice on Mt. Baden Powell, rejoin the trail, take a little hitch around a new fire closure and also loop around a 4 mile endangered frog closure. We started down from the top of the mountain about 2 1/2 miles to my first target area. We were immediately thwarted and my plan out the window when the regular road portion of Hwy 2 was closed due to ice. Using this stretch of Hwy 2 was to be 2 legs of my plan today. One to hike and one to hitch. I noticed a man in his car with a defeated look on his face, furiously looking through maps, likely going through the same thought process I was. “Well… What now??” I introduced myself and, sure enough, he was taking a driving tour of the mountains and now stuck not wanting to backtrack the same way he came in. With the GPS on my phone, I helped show him a desert mountain reroute that might help us both. His name was Collin and he was from the UK. He was up for the plan and dropped us along the highway near Acton. A little local bar provided cheap beer and a cheeseburger while we reset our plans. I really didn’t want to miss the hike up Baden Powell but we are just too early in the season. There were 2 rescues there just in the last few days so we just couldn’t take the risk. We will definitely come back later in the year to spend 2 days on the mountain. We made our way to the KOA campground to spend the night. It is also exactly where the fire closure ends and where we wanted to get back on the trail at the end of my original plan. The KOA was also the home for the night of Hurricane who is from New Zealand and the trio of Woodrat, Galpal and RockDoc. It was a good hot shower for us and a chance to grill for dinner. Lace scored some expensive freeze dried meals from the hiker box for dinners this next week and the KOA has a little store that had a dozen kinds of Hagen Das ice cream which we both indulged in our tent before going to sleep.
Speaking of tents. Ultralight. Ultralight. It’s the way to go. We love ours but didn’t know if a floor space of 50″ x 80″ was going to be too tight for us or not so much. As it turns out, our mattress pads are 25″ wide so they perfectly fill the floor with no cold ground spots. Our tent is basically just a fancy mosquito net attached to a thin floor. It’s zero privacy but the stars n moon view we get every night is worth it. We have only used the rainfly 4 nights of 32. We also picked a model that had 2 side doors. This way we can each get in and out of the tent without disturbing the other. So far it has worked out great. If you’re buying a tent for backpacking, I’d firmly nudge you toward the lightest smallest tent you can afford. A very small footprint also helps you set up in little niche flat spots along the twisty and steep mountain trails like on the PCT. With an added ground cloth, 4 sand spikes, 4 nail spikes and a little extra tie down cord, we still come in under 2 pounds. It’s so very worth the extra dollars to me to carry a pound or two less in base weight. 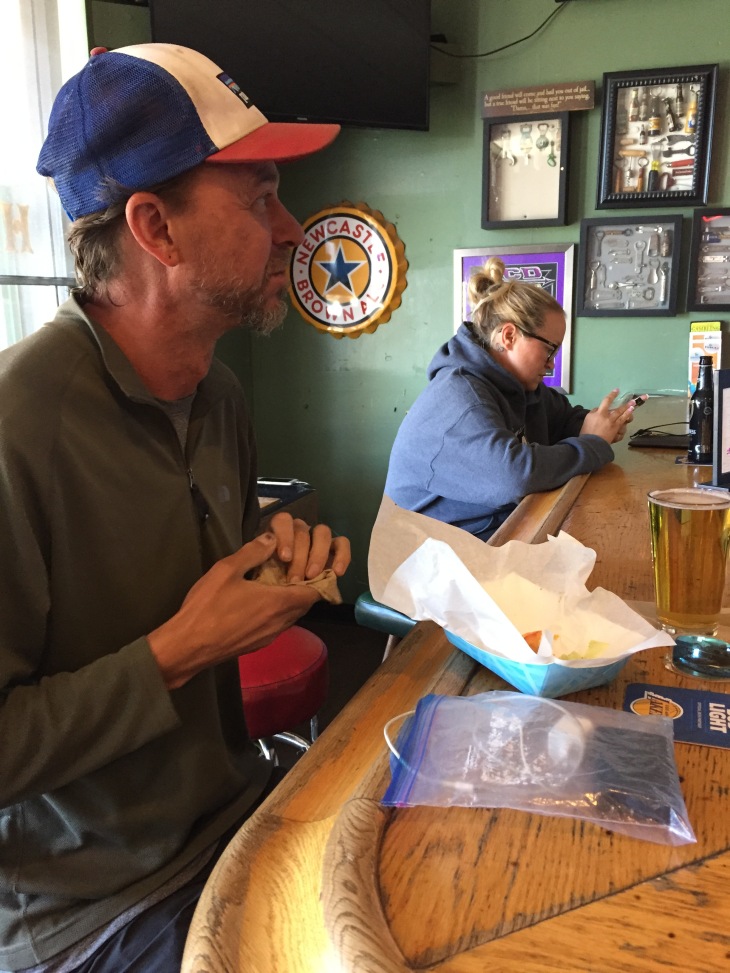 That burger was good!