Rob: A 3-4 hour ride becomes a 10 hour endurance test of mind and body. 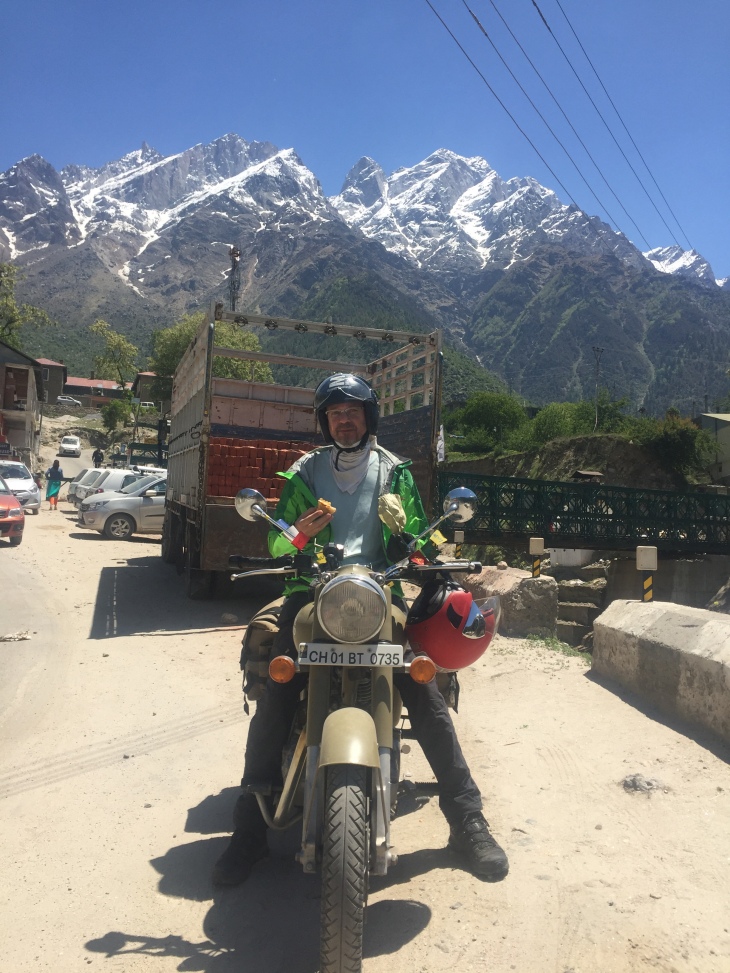 Setting off from Sangla this morning we stopped by the doctor again, shoved samosas in our faces for breakfast, took a deep breath and began the journey.  I like how this photo just so happens to be in front of a truck carrying bricks because there are bricks being made everywhere we have been in India – sides of road, in town and it is just as much a part of the surroundings as the mountains.

This was our most difficult day on the big thumping Royal Beast so far. Coming down from the Sangla Valley was a challenge on the rough sandy road without having a rear brake. I didn’t notice how difficult the ride was as we were chugging up the 3,000 feet or so of elevation that we were now descending. We are simply too heavy with the 500cc bike, gear bags and 2 up for the sole single disk front brake. Lacy had to hop off the back of the bike on a sandy downhill with no braking power or traction and also needed to bail off when we began sliding backwards at one point when we got stopped behind a bus on a sharp uphill climb.

Looking back on Sangla

It was also our longest day of traveling beginning mid-morning and arriving at our destination an hour or so after dark. In that time we overcame a number of “roadblocks”. Lacy persevered through government apathy to extend our Inner Line Permits in a record time of 1 1/2 hours overcoming the “service-charge” culture to get what is supposed to be a free extension. Then we spent two hours waiting out the bulldozer clearing and TNT blasting of a landslide that filled the road with house sized boulders. Here we stopped along side a great group of bikers from Delhi on their annual trip. Five guys all  in their Royal Enfield gear, kitted up RE Bullet bikes complete with matching Indian flags flying from the rear of their gear packs. It was great to chat with them about each of our trips and took the edge off some of the frustrations we’ve had along the way thus far. The road itself was heavily trafficked with seriously large construction and Army trucks, 4x4s, cars and motorcyclists like us. It was the toughest terrain so far as we battled and rattled along slowly in second gear picking the best line through rubble. My arms and shoulders burned from the constant attention needed to keep the front tire as straight as possible while riding along the edge of the cliffside. Most trucks and 4x4s gave us little to no room, blowing us to and over the edges of the drivable area often. Craggy carved-out rock wall to one side and sheer drop off to the churning river 1,000ft below on the other. 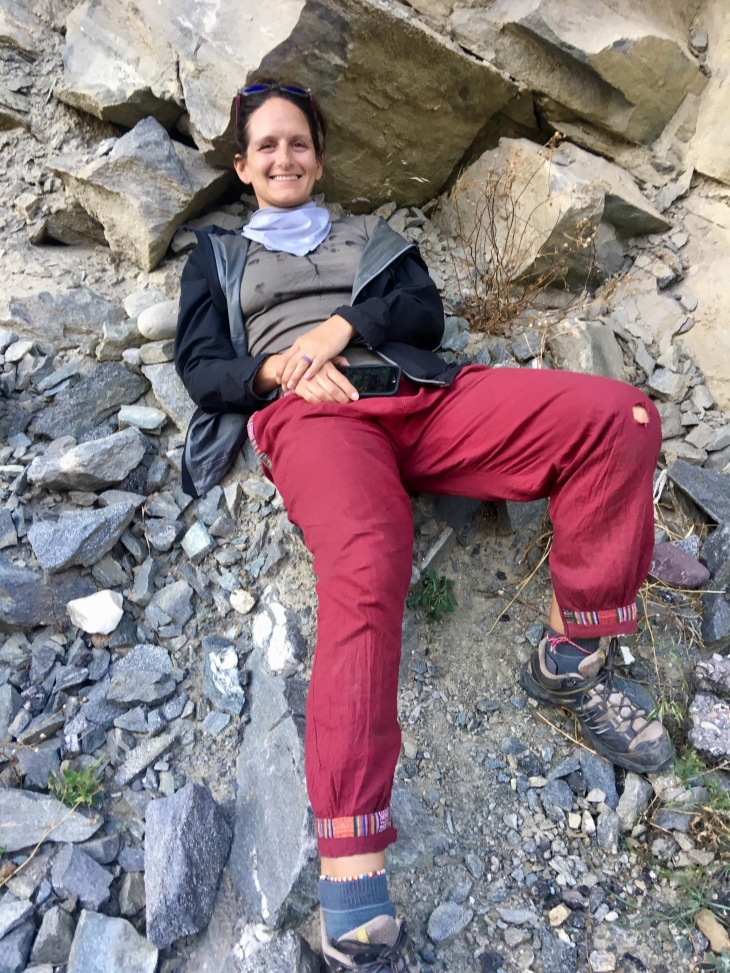 I found myself a shady spot on some rocks on the side of the road and was in pretty good spirits while waiting for the blast to clear.

We parked beside the other Royal Enfields in the backup for the blasting.  The benefit of being a motorcycle is that you can scoot to the front of the massive line that piles up on the mountain road.

At one point we came upon a 200m long wooden bridge that spanned one river as it met another. Without slowing much we headed across thinking that so many vehicles used this bridge daily so it must be pretty safe despite it’s ragged appearance. I’m glad I paid quick and close attention to the wood planks because the gaps in between them were big enough to trap our front wheel completely and where boards butted against each other, several spaces where they connected previously were simply missing altogether.

Is this old wooden bridge adorned in prayer flags because you need to pray you don’t get your front tire stuck in one of the many gaping holes as you cross???

It was truly a battle of nerves and willpower as day turned to dusk on the canyon road and then quickly into a very very dark night. No moon. Taillights ahead showed us some of the future turns. With headlights blinding us, the trucks ground up suffocating dust and glare. Sometimes we had to just get as far to the edge as we dared and stop to let them pass by inches away while we held our breath from the dust, diesel exhaust and just our own nerves of not really knowing what was about to happen. Two of our three stream crossings today came at night with blind faith to what was below the surface of the water and how deep it would go before we came up the other side. One was fully up to my mid shin but the surprise was how cold the water was against my skin. We are in the foothills of the snow-covered Himalayan Mountains and even though we are in a canyon following alongside a river, we are still at 8,000-9,000 ft so I guess I shouldn’t have been so shocked at the ice cold wake-up call splashing against my legs. 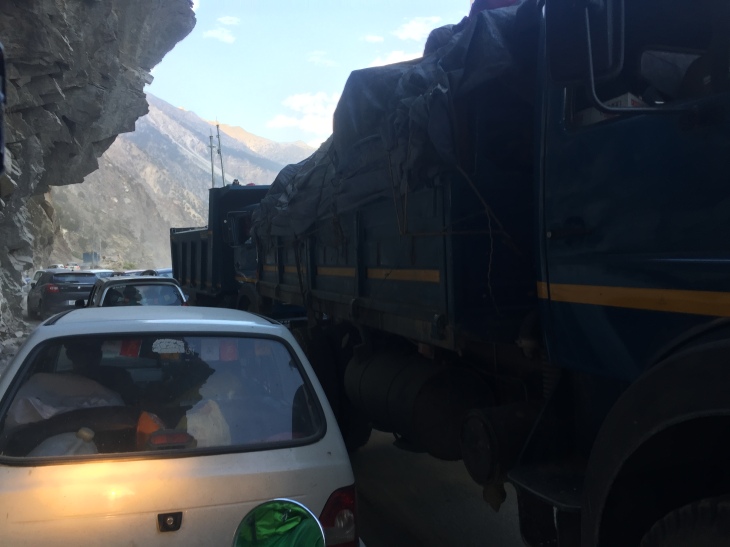 This and the photo below give you an idea of the dense traffic that was trying to move across the narrow mountain road after the blast cleared.  Bumper to bumper with a steep drop off to the river on one side (with no guardrail) and a rock mountainside on the other. Driving on this as night was a little less than fun.

I shot this backwards over my head.  The car behind us would be right on our tail (as they always are) but it can’t get past truck next to it.  This scene is extremely common along the mountain roads.

Lacy, still the bestest, cutest navigatress on earth, finally announced the upcoming turn that would begin our climb to the town of Pooh. Just less than a dozen switchbacks and 3km away from turning the bike’s key off for the day. I hoped I had just enough mental strength left in me to reach our hotel at the top of the last climb in total darkness. Lit by minimal light from our dust covered headlight we made our way into the main part of the town. Almost as soon as we saw the sign for the OM Hotel, we also heard voices calling our names. Lacy hopped off the bike to let me maneuver better. We quickly shook hands with our host and parked the bike for the night.

Switchbacks from NH 5 to Pooh – the homestretch.  This photo was taken on the way of Pooh as when we arrived it was pitch black.

Pooh clings to the cliff side of dramatically angled canyon. We could hear the rushing river far below us. The small white lights of Pooh and it’s sister villages dotted the mountainside. Stars, Venus and red twinkling Mars above us. I knew higher mountains surrounded us but they would wait until sunrise to reveal themselves. Without a moon and in such a steep and narrow canyon, it was the blackest night we had seen for some time. 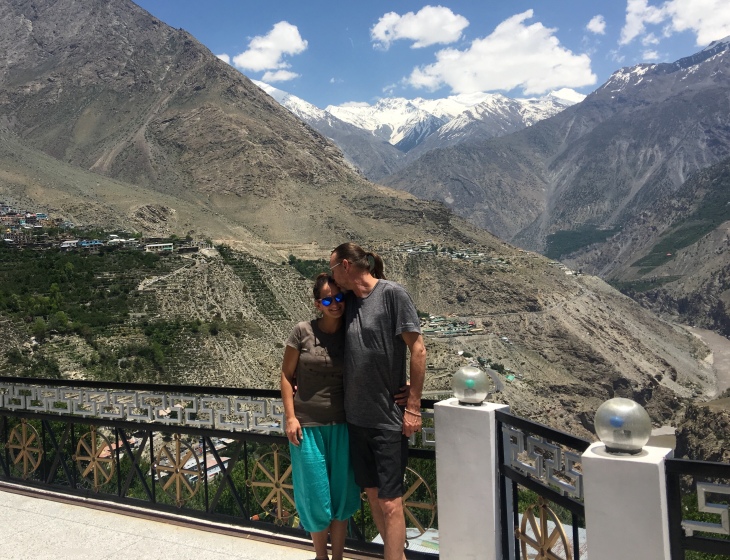 The next morning we were feeling ourselves again after being welcomed Tanzin to his beautiful Om Hotel.  This view from the terrace (and our balcony below) made us feel like tiny ants among the massive mountains. 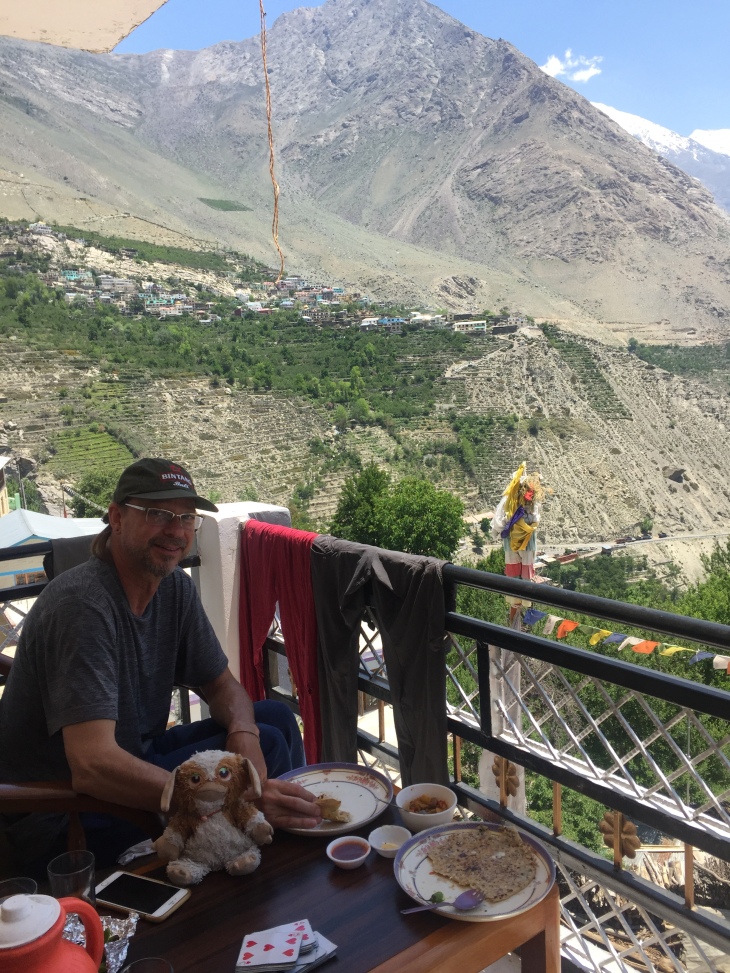 Our once dreadfully dirty riding clothes that we washed out are drying on the deck while we play cards, eat breakfast and enjoy the last bit of cellular service we will have for two weeks.

Tanzin, our host, had a table set up for us on his large rooftop patio, lounge and restaurant.  After cleaning off as much dust and dirt of ourselves as we could in a hurry we joined him for some amazing Arak made by his aunt from his family’s local apple orchard. A pretty potent apple based moonshine. It was a great way to end a tiring day with spirited conversation and great food from his kitchen. Chili chicken, spicy Dal and Roti was washed down with more Arak and all shared tales of our past, present and future travels. Tanzin’s warm welcome was, well … very welcomed and truly appreciated.

Our room is on the Eastern corner of his family home turned into a hotel. I awoke with all the windows and drapes wide open to see the soft blue light of the sunrise on the snowy Himalayas. Another great reward for our efforts getting here.

Lacy: To say that today, our first day back on the bike after nursing Rob’s sprained ankle, was the most nerve-racking, tense and dangerous feeling day I have ever had on a motorcycle would sum it up pretty accurately. To be clear, neither one of us would take the risk of getting back on the bike without feeling 100% comfortable with Rob’s ability to ride, but having just had an “incident” and still being without a rear brake in addition to knowing we had to go back out of Sangla on a dirt road on the side of a mountain with aggressive drivers and ya da ya da we could each feel how tense the other was as soon as we embarked on the day’s journey. I may not have taken a breath for the first hour. Getting our Inner Line Permit extension in Reckong Peo so that we could enter Kaza was yet another moment of wanting to tear my hair out as I had to bite my tongue and be quietly persistent to have our permit extended. We were told that it could easily be done once we showed the X-ray of Rob’s foot and if it hadn’t been for one sweet soul in the office who wanted to help us by doing the right thing we would have been turned away to pay the bribe around the corner again. No one wanted to do the very job they are employed to do unless they got a kickback. At the end of the process I looked the man who helped me in the eyes and told him I appreciated his help and kindness. And with that we unknowingly set off on the most gut wrenching part of our ride. Being stuck for two hours on the road for the blast clearing wasn’t so bad, however the fact that it set us back to being stuck in a ridiculous amount of bumper to bumper aggressive Indian traffic on the side of a sheer drop off on the side of a mountain in the dark was unbelievably scary. Having to jump off the bike twice today while it was moving because the rear brake isn’t working was equally as scary. Hands down the most frightening day on a bike ever and Rob is my HERO for keeping us safe. I honestly am in awe of him. But let me tell you this – the universe gives you just what you need and arriving to Pooh into the warmth of Tanzin’s hospitality was just the uplift of spirit that was required. He is one a million and made a complicated and frustrating day all the worthwhile.