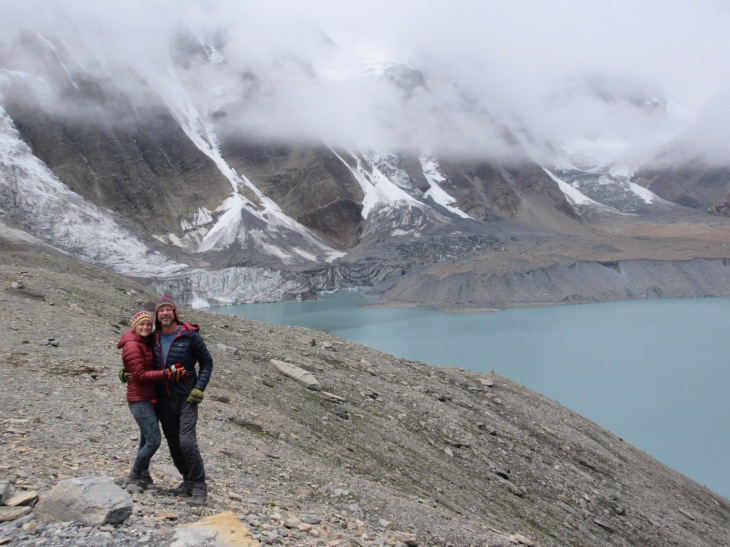 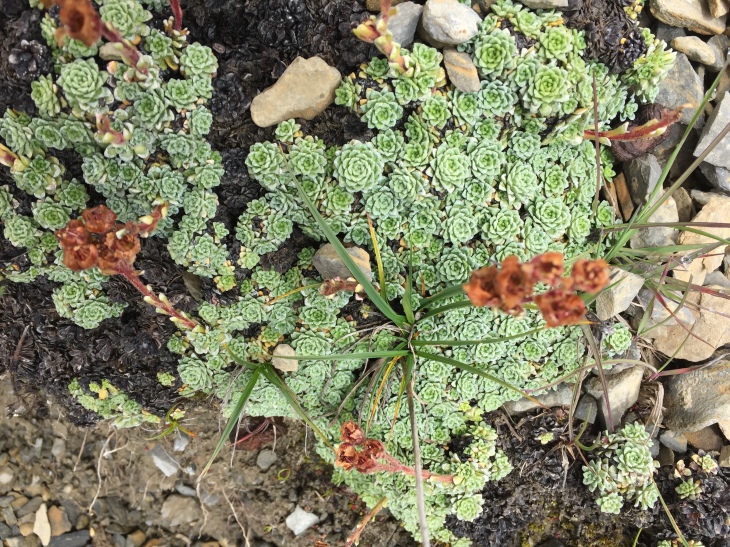 Miles: 7.2 round trip to Tilicho Lake from Base Camp 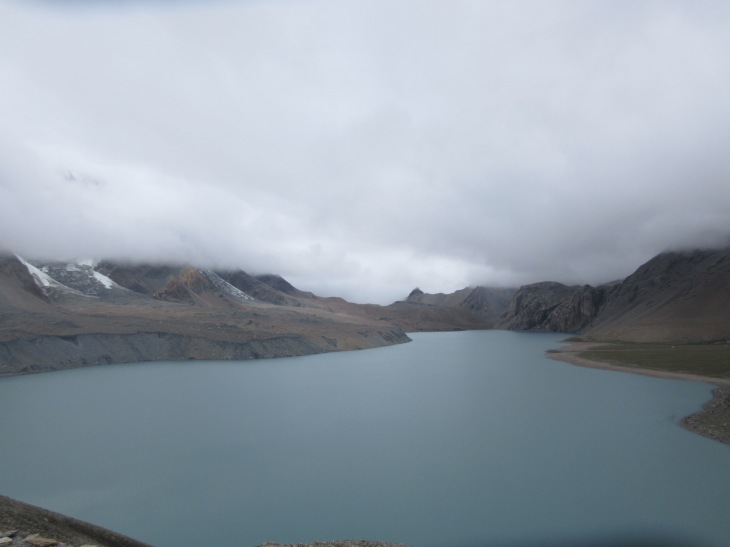 A little cloudy but still a GREAT day. And you can still see the glaciers on the the left of the lake 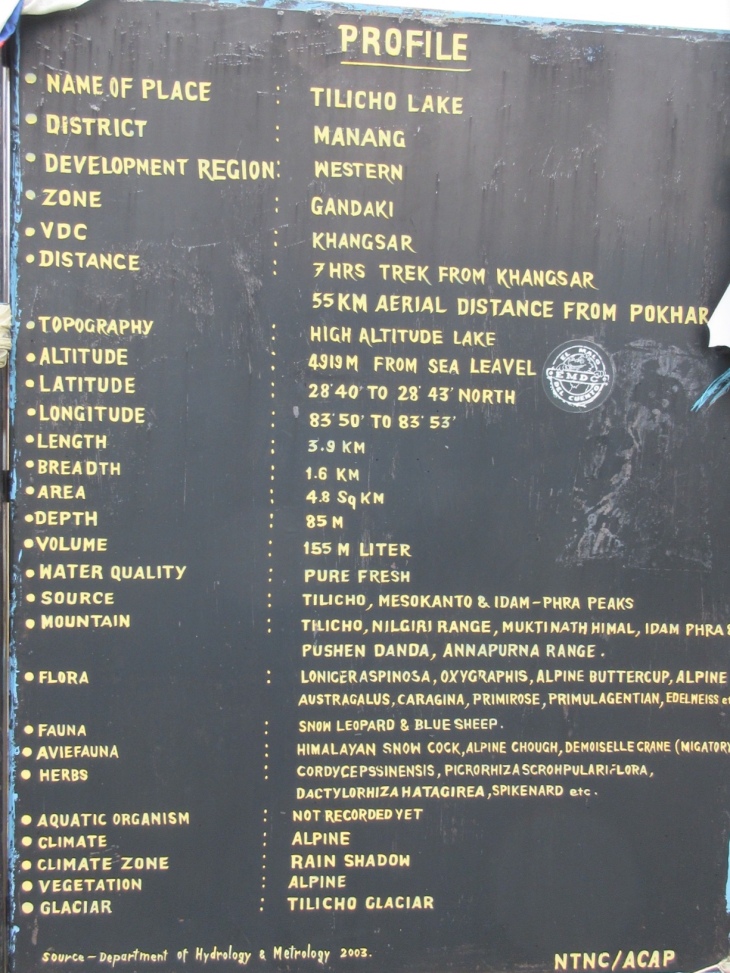 Rob: 3000ft up and back to reach Tilicho Lake at 16,575ft was an amazing hike from start to finish. Lacy hiked so strong and steady for 2 1/2 hours straight while I felt my lungs and legs protest loudly. Thankfully, my beautiful wife lead the way and let me catch up near the last little ridge that looked down and across the semi-frozen lake. The sound and sight of the nearly constant snow avalanches were a surprise to us and stopped us cold in conversation when they came tumbling down from several of the peaks. On our way down, I surprised a Bharal and her two fawns. They surprised me too being just 20ft away when we crossed paths. I wanted to ask them what they were doing up there? There really wasn’t much for them to eat but a few tiny wildflowers growing up in between the rock. When we returned to Base Camp, we ordered a little pot of Masala Tea to celebrate our first high climb above the height of Mt. Whitney which we climbed last year. 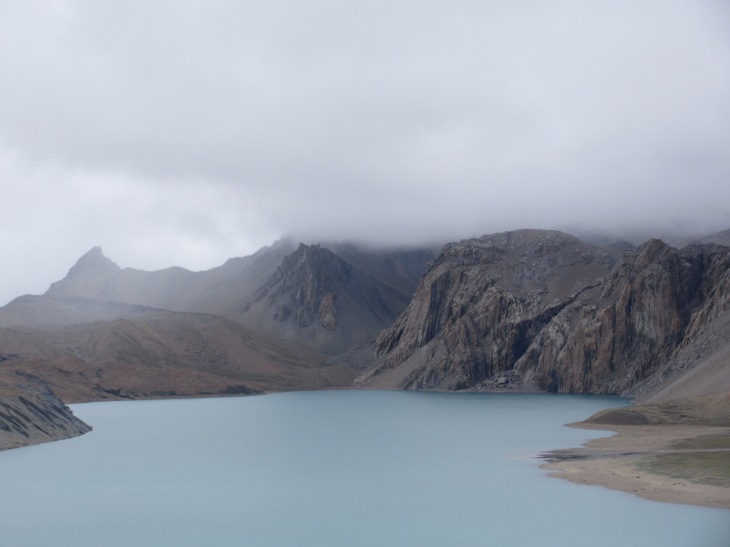 Rob heading back down for some lunch

Lacy: The alarm went off at 4:45 this morning and I immediately felt defeated when I heard the rain and saw all the clouds. Why?! We kept checking every 30 minutes and could actually see the Himalayas more than any other day here, but it was still raining. At 8am the rain slowed to a drizzle and we agreed to head the 2.5 hours and nearly 3,000 ft straight up the trail to the lake. I have to admit, my heart wasn’t in it when we set out. I felt a bit defeated by the rain and clouds and didn’t expect much of a view. Silly me, I had let myself build up expectations and now I expected to have them crushed.  I kept my stride slow and steady the entire way up the mountain. My mood improved as I could see more of the mountains as I climbed and I actually felt good with the altitude gain. I didn’t experience any shortness of breath, extreme fatigue or headache while hiking up. I just kept it “steady eddy” the entire time and felt my confidence grow. As we approached the lake we saw most people heading back already. Tilicho is a  beautiful lake as it is surrounded by dry mountains on the right and snow covered mountains and glaciers on the left. We sat by the lake for 90 minutes listening to and watching multiple avalanches roll down. I have never seen a snow avalanche before, much less a dozen in one morning. It was very peaceful up there, but eventually, after many photos, we tied our shoes tight for the descent and hiked back to the lodge for a much deserved pot of masala tea and an early dinner. After all, we did out-climb our previous highest altitude at Mt Whitney last year by 2,000 ft today!  After hot showers, early dinners and reviewing the route for the next day we were laying with our feet up in bed by 5:30. It was a great accomplishment today and we both feel really grateful that we have the opportunity to be here together!

Leaving the lake after a great morning!