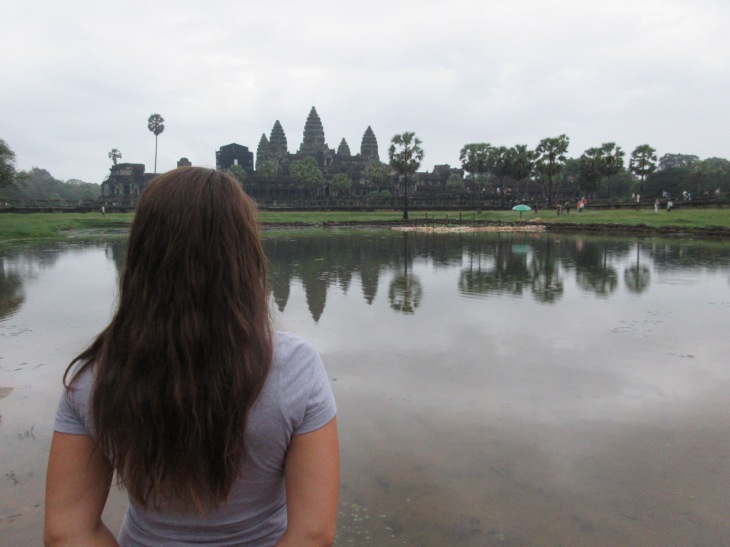 Enjoying scallion stuffed rice patties.  This certainly satisfied my undying love for anything in the onion family.

Rob is considering a new profession as a tuk tuk driver 🤨😆

Today, Friday July 20th, finds us having lunch and “playing office” in Malaysia’s Kuala Lampur airport while we wait for our flight to Nepal.  After spending a really great week at Blue Indigo yoga retreat in Siem Reap, Cambodia we began to ask ourselves, “what next?”   I was beginning to yearn to be immersed in nature again since we had spent so much time in the cities and towns of Cambodia – Phnom Penh to Kep and Kampot and ending in the north in Siem Reap.  During our 3 weeks here we traveled more as tourists as opposed to feeling like locals in Indonesia. Still, we had a really nice time with the different experience as we took buffalo cart rides, endless tuk tuks, enjoyed the influence of the country’s very tasty international cuisine, marveled at the splendor of Angkor Wat and met some incredibly special people along the way.  Rob and I both gained a tremendous amount from our 7 nights and days strengthening our yoga practice spiritually and physically. I really connected with the philosophy and gained a lot of insight in those few days that has made me eager to learn more.  Over a French dinner we rewarded ourselves with the day we checked out of the retreat, Rob even asked me if I may want to pursue a teacher training sometime soon.  As our life unfolds together, anything is possible.

We didn’t take many photos during the week of our retreat except for the day we we went to a local pagoda where we practiced yoga and participated in a Buddhist blessing ceremony. 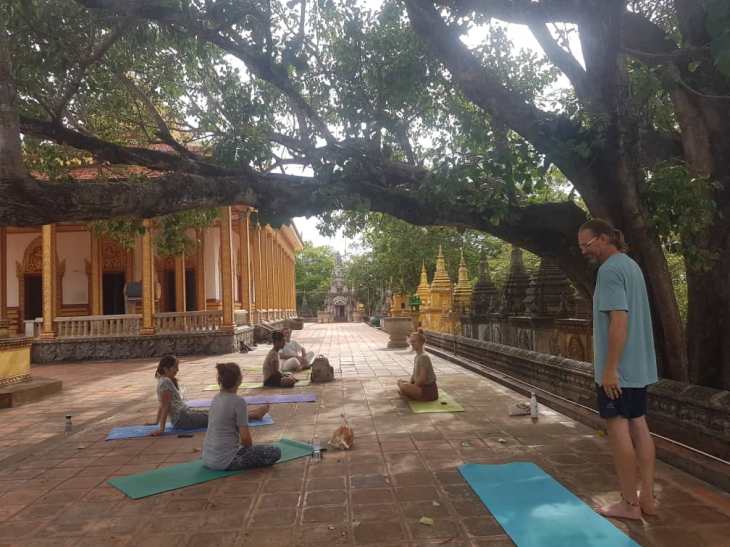 Before leaving by we spent a marvelous 12 hour day visiting the temples of the Angkor complex. As we visited temple after temple, it became easy to see the unique variations of each. The level of detail that was used to carve the bas reliefs and construct these structures is truly special. Our favorites were Bantey Srei and Bayon. I wanted to find a quiet spot in either to meditate in, but there are just way too many people visiting, even in the low season. Neither of us have any desire to experience how crowded it would be during high season.

We woke up at 4:30 to get to Angkor Wat and see the sunrise over it. This picture evidences that our “sunrise luck” isn’t nonexistent. 2 volcanoes and now Angkor Wat means we are 3 for 3 on sunrise fails!

The rain couldn’t keep us away though 😄 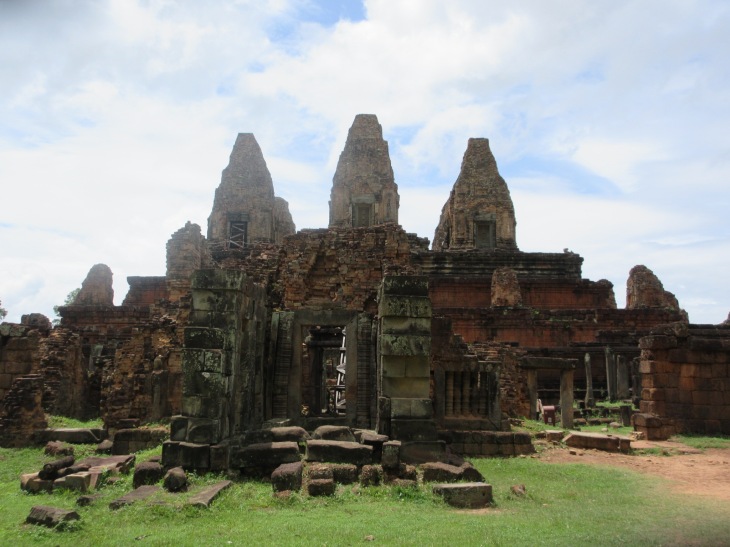 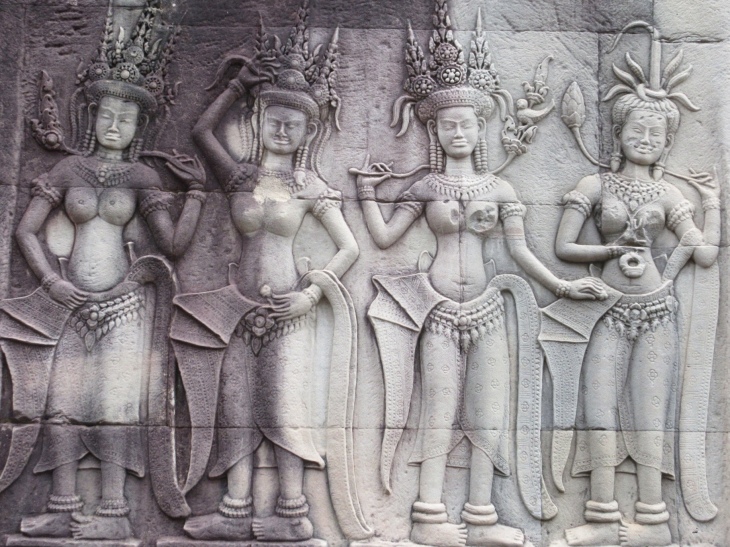 This temple is where the Tomb Raider movie was filmed. Trees have overtaken the structure and it is a magnificent example of nature’s strength and will. 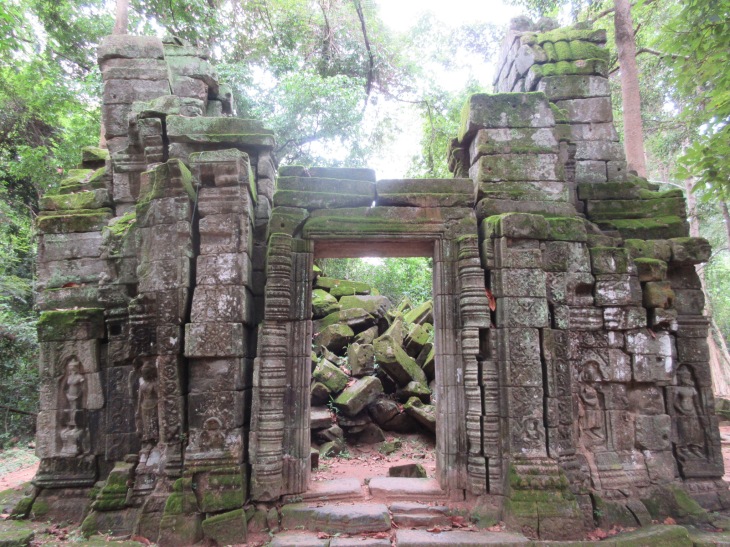 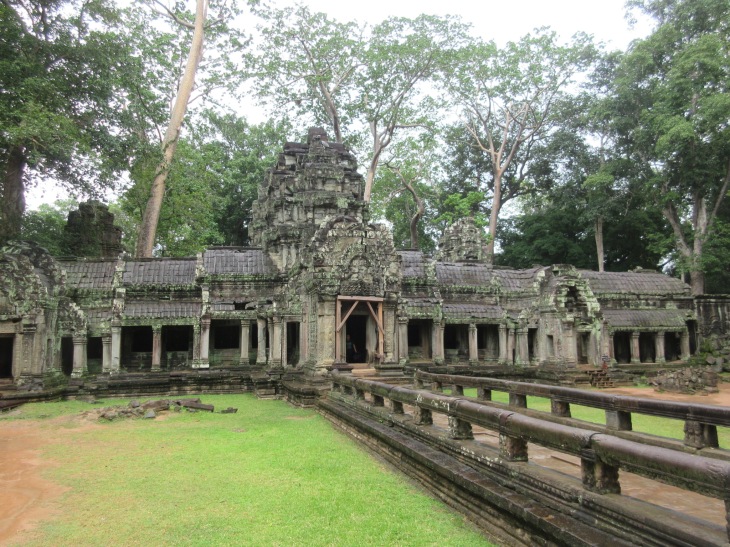 Bayon, happy face temple, has over 200 smiling faces watching over you

Bantey Srei is a much smaller temple and carved with the most intricate detail.  All by women and it is unbelievably stunning.  I could have spent all day looking over the detailed work. 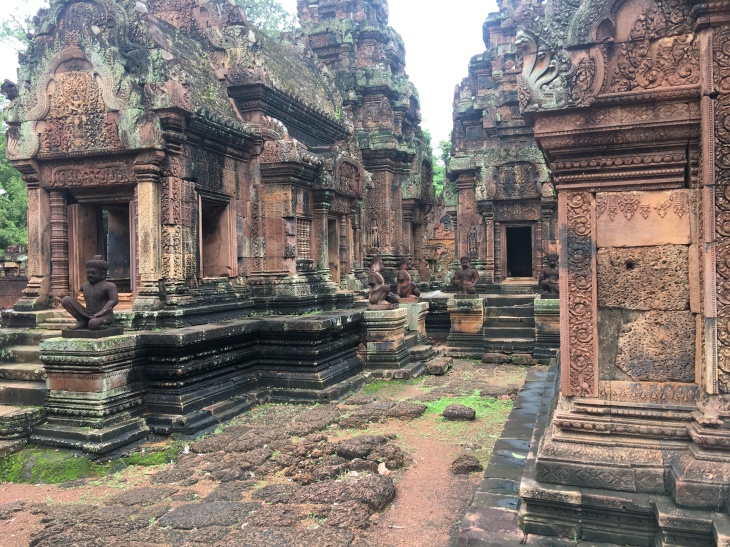 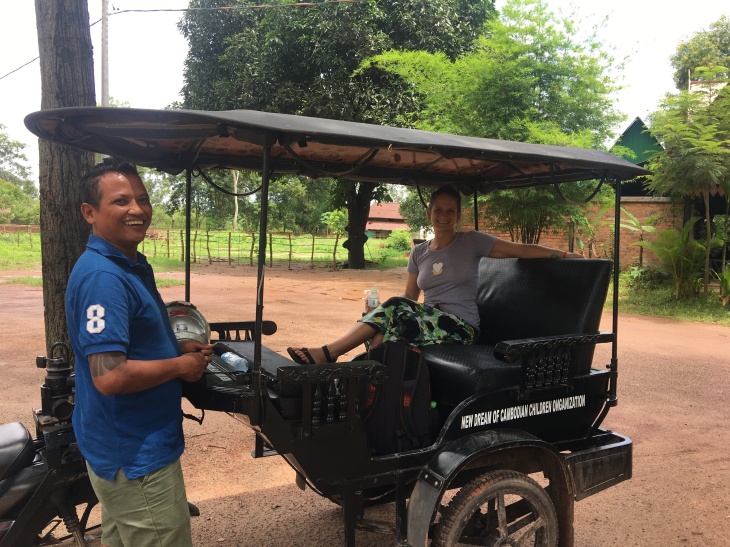 Kim, our tuk tuk driver for the day shares his touching story with us of how he rose from poverty in the village by learning English as a monk.  Leaving the monastery, he saved his money as a tuk tuk driver and began a school to teach English to over 80 kids from villages.  Big heart, this guy!

We are both very excited to land in Kathmandu, Nepal tonight where we will begin our preparations for a 3 week trek along the Annapurna circuit. This is a dream come true for me. In April, as we sat on the front porch of Kenawa and contemplated what we may do when we left the island at the end of the month, I told Rob I would love to hike the Annapurna, but that monsoon season didn’t end until October and there was no way that we would still be on this part of the world then. Boy, was I wrong on 2 points!  First, we learned that the Annapurna is in a rain shadow and doesn’t experience rain like the rest of the country during monsoon season.  Even better, July is the shoulder season and will have far less people which is a huge plus for us. Traveling Cambodia during the low season turned out be a major benefit for us – cheaper accommodations and far less people to deal with. Second, we are planning to be in this part of the world until at least October now. At the end of August, after completing our Himalayan trek during which Rob will celebrate his birthday and we will enjoy our 3 year wedding anniversary, we will head back to Malaysia and actually leave the airport this time!  Meeting a new friend in Pangkor, we will get an in-depth crash course in his boat and sailing as we embark on a 4-5 week voyage across the sea where we will return to Lombok, Indonesia. Rob has far more experience with sail boats than I do so I will be absorbing a lot very quickly as we help safely bring Chris’s 54ft boat across international waters. It will just be the 3 of us. 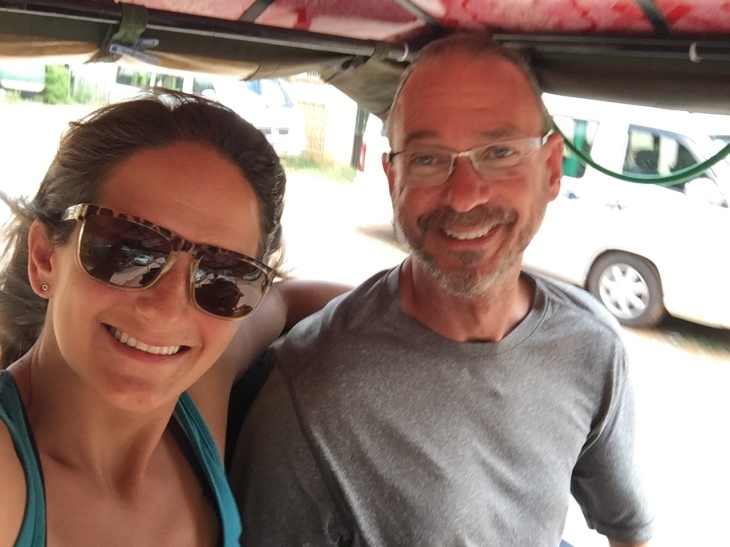 Feeling in great spirits after our retreat, we tuk tuked to our hotel…

…where we had the cutest surprise on the bed! 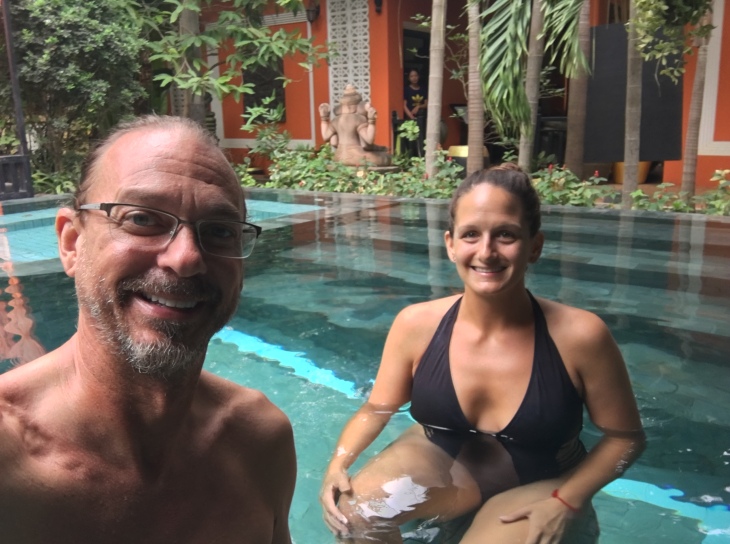 Enjoying the low season rates we scored a hotel with a great pool for less than $20. 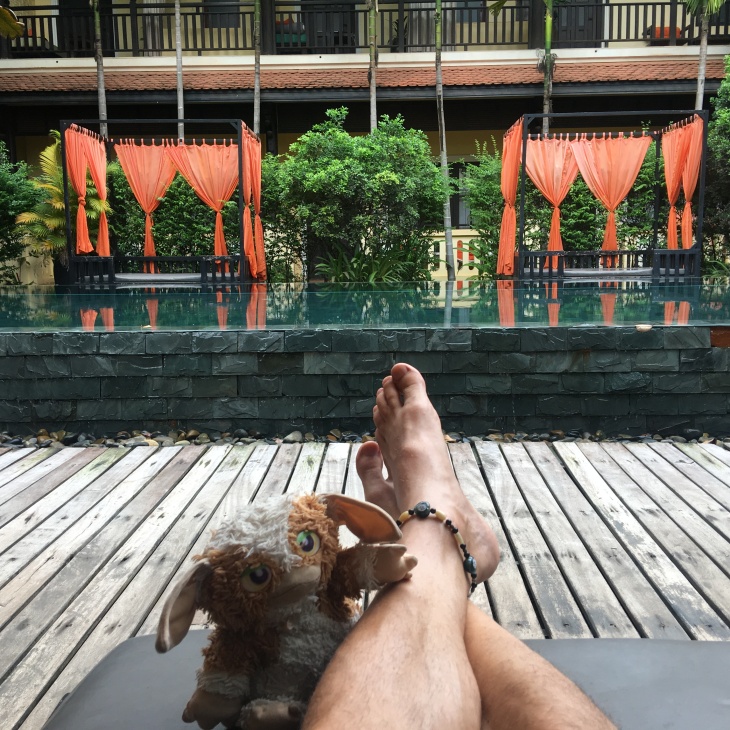 We are both looking forward to being back in Indonesia.  While Cambodia was great we didn’t develope anywhere near the same level of affection and attachment to this country as we did our beloved Indonesia.  One of our amazing yoga teachers had just spent 6 weeks in Indonesia before coming to Cambodia.  The 3 of us shared stories and lamented about what we missed about the country.  Many conversations ended with, “it always comes back to Indonesia.”  Including us this October…even if it is a twisted route across Asia. 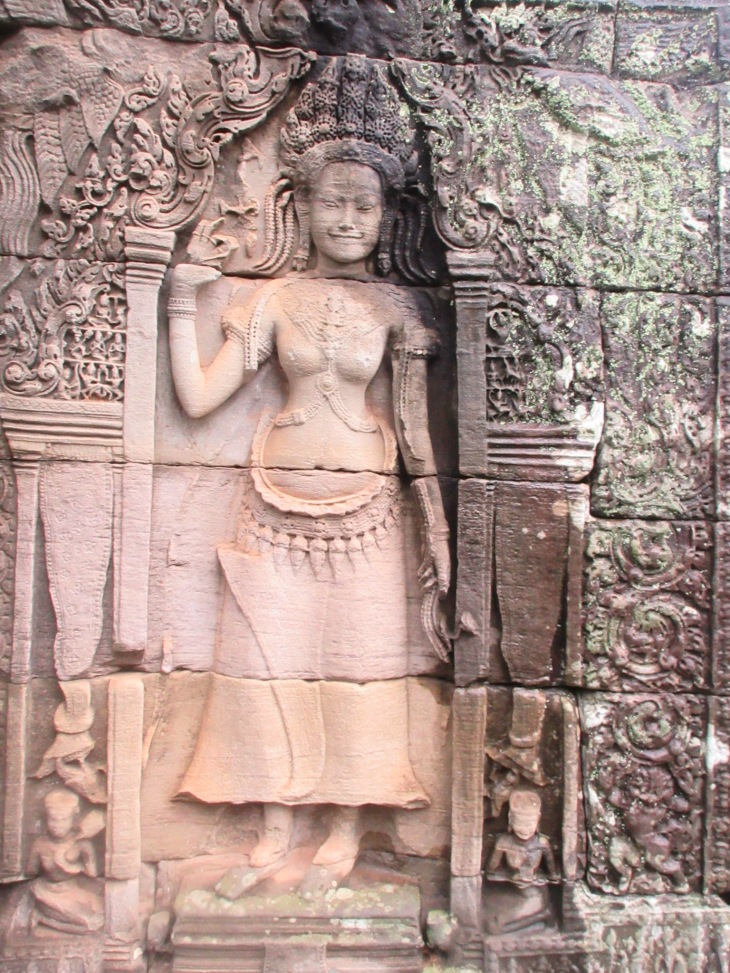