We planned a little break for ourselves when we landed in Indonesia before heading to Kenawa. Bali, Lombok and Sumbawa are all larger islands with a developed tourism infrastructure. Keeping with our theme of being out on the edges, I found a small, simple, brand new resort on an island nearby. It is run by an Italian couple assisted by a truly local staff. Mauro & Valentina were gracious hosts, Sri cooked us spicy meals, Freddy helped explain the flora & fauna and the rest of the staff let us just relax and enjoy our jet lag in a beautiful setting. 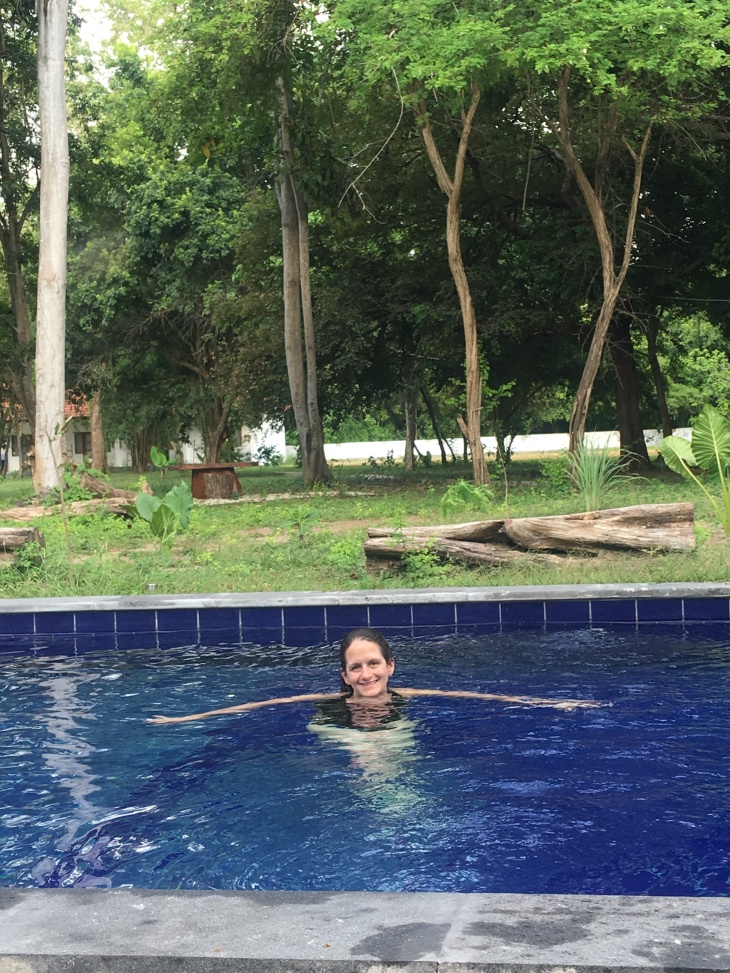 Kicking back in the pool as soon as we arrived 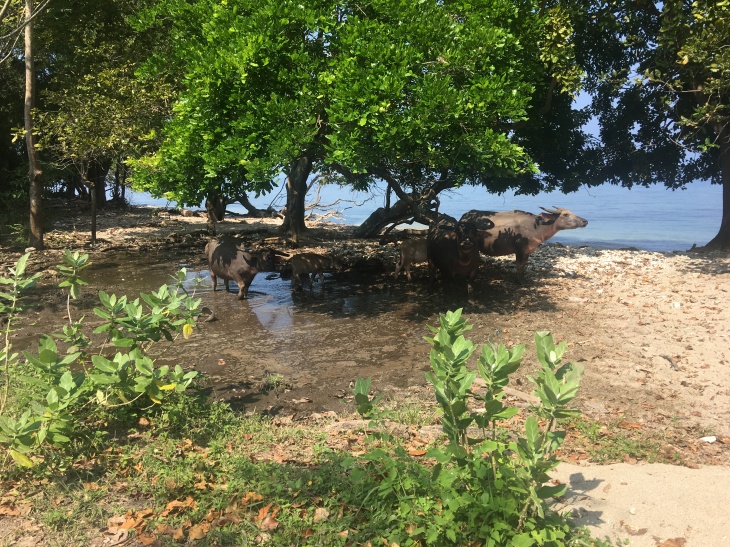 Spicy noodles and Bintang beer for breakfast. A walk along the beach, dip in their cool refreshing pool and hours sitting on the end of their boat jetty just staring down into the clear water at all the colorful tropical fish was a perfect way to recover from the preceding planes, cars and boats. I could remember the names for some of the fish and the others I just pointed out to Lacy by color and shape like, “see the yellow square one??” 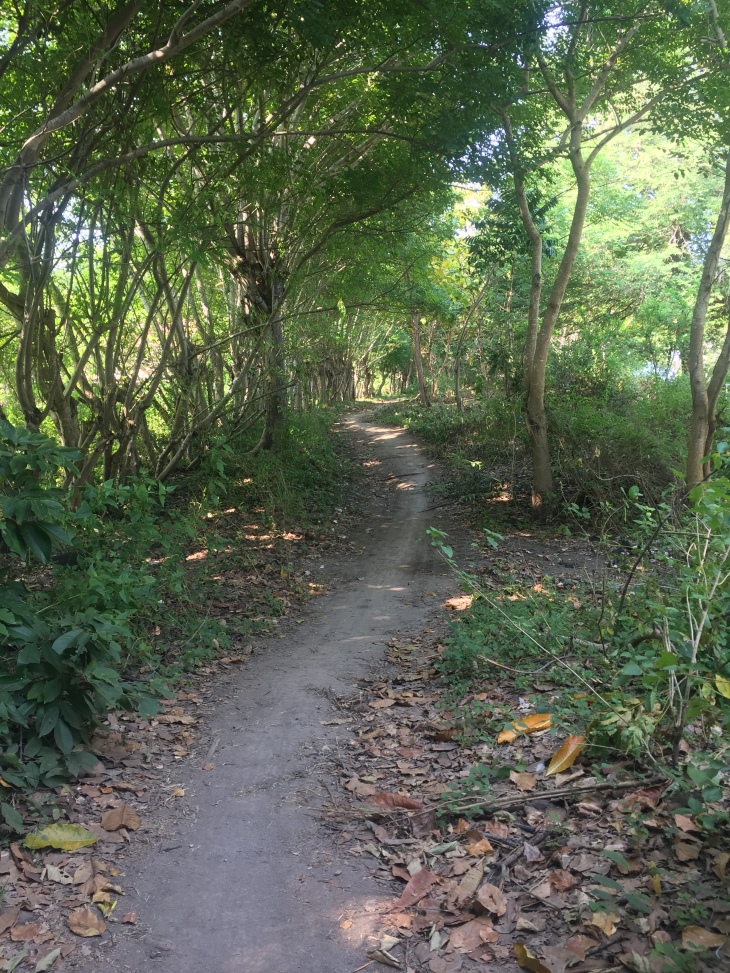 The beginning of the walk to the village 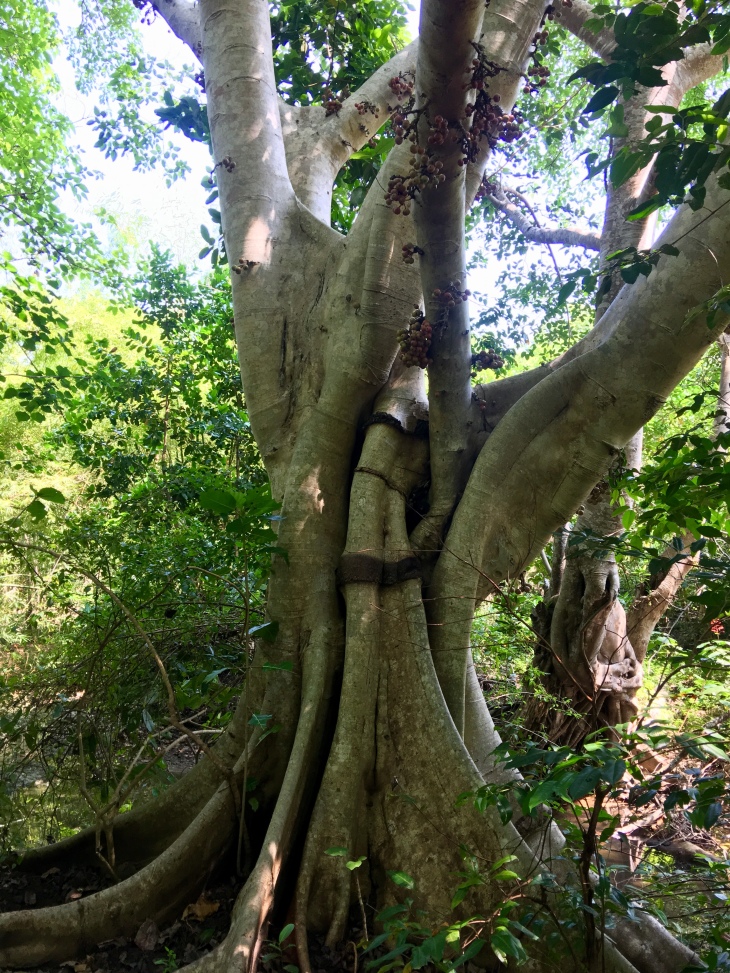 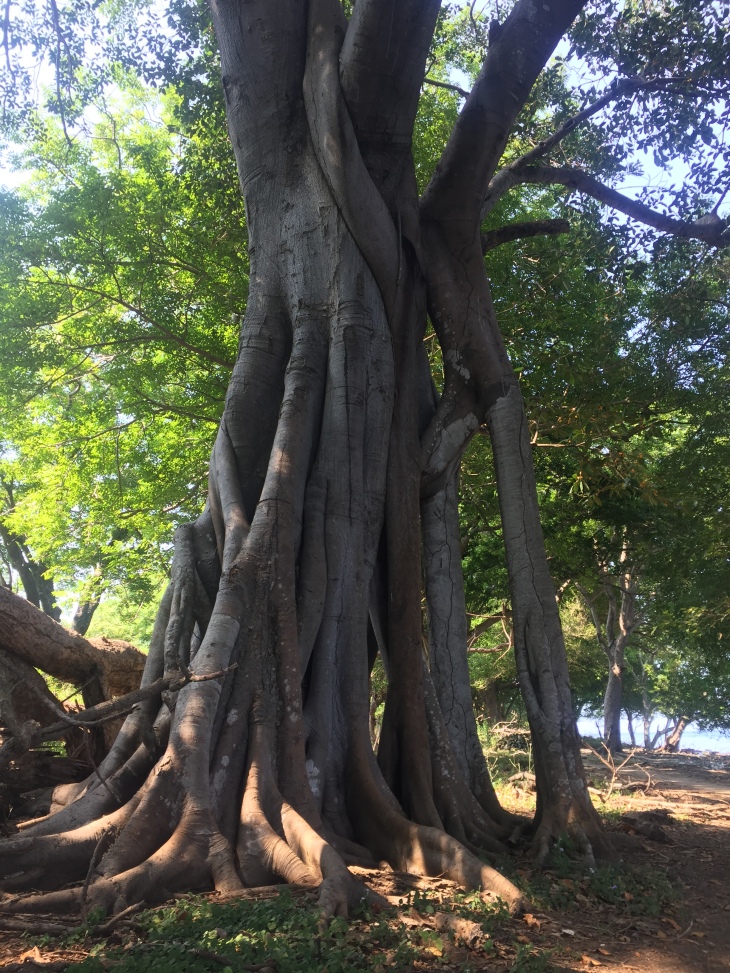 Usually, Lacy is the first one up and adventurous. On our second full day there, she was the one who slept in late so I ventured out. A 40 minute walk took me along the coast and through a nearby village. A left turn at a stream took me up into the jungle and along a winding path to arrive at a small waterfall. The walk along the coast was an exercise in emotions. A path between an amazing jungle, naturally cultivated banana groves and small gardens also showed me the world’s plastic bottles, bags and trash that wash up and collect among the picturesque mangroves and driftwood. The colorful fish swim in colorful plastic twice a day as high tide shuffles it all around. The village was another test of my emotions. I’ve never really walked through an area where houses and trash seemed intertwined and people slept out in the open under rusting tin shed roofs. Skinny little chickens ran from me, more goats dared me to pass than ran away and the town dogs came to sniff and see who I was. The thing is, everybody smiled. Every child was dressed neatly, some in school uniforms. They all waved and said “Hello”. I think I waved at every person in town. Twice. I then headed onto more of a jungle path. It wound me through huge trees with even larger leaves, trees with ribbon like roots that stuck up out of the ground, trees with spikes and what looked like little apples growing, vines, ferns, moss and almost nothing that felt familiar. Mr. Hobbit? Are you there? The waterfall was more like a cascading series of pools than a true waterfall. Pretty and soothing like waterfalls are, but I found myself still staring at the trees. A few had monkeys in them that stared back at me. On my way back I came across the largest lizard I’ve ever seen at about 6+ feet long and solid black. After we scared the shit out of each other, it ran off with an incredibly loud thumping from every footstep / pawstep it took. On my second trip through the little village, 3 young girls waved like before but after I passed them, the giggles came out. They whizzed by me on a scooter a minute later and set up to wave and giggle again. I’d forgotten about Gizmo being in his typical ride along spot on my daypack. He’s always waving so I guess we all made each other smile more than a day’s worth by 10am.

Early the following day, it was time to catch the public boat back to Sumbawa. We left the Blue EmOcean resort that has been created over the last several years by a great young couple but just recently open to the public. 6 rooms, a small restaurant and a tranquil pool have been built in what was wild coastal jungle on a quiet coral beach. I really hope we find our way back there sometime. 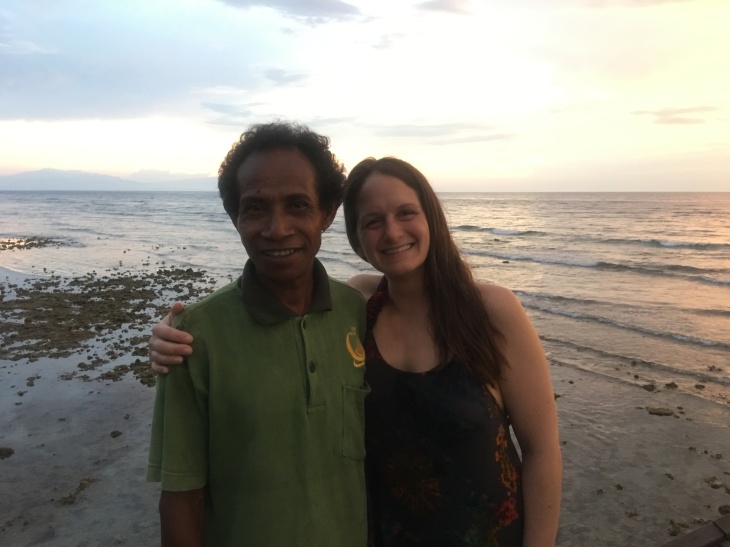 Freddy is awesome. He told us the names of trees we were curious about, gave us both beautiful rings he hollowed from shells and shared a wealth of knowledge

The loud clacking and crackle of the old marine diesel engine made me and the chickens, already onboard the boat, jump as it fired up. Everyone else seemed little fazed, so I sat with Lacy on the middle platform under the tarp shade of a typical small Indonesian boat for the 2 hour trip. The tarp was actually an up-cycled tarp sign that formerly covered a billboard likely somewhere in Bali. The slow ride just let us take in more of the island scenery as we cruised along, spotting jumping tuna being chased by a pod of dolphin. We called our previous driver, Herman, when we arrived. After a little negotiation, he agreed to take us to the port on the other side of the island 2 hours drive away. Not that it was physically all that far away but with the roads full of small scooters, big scooters, small motorcycles, micro vans, work trucks, horse carriages and a few cows, we were glad to have an expert navigator. We stopped in the town of Alas along the way to stock up for the time on Kenawa. 10 kilos of rice was at the top of the list. Sugar, noodles, lots and lots of vegetables including cabbage, carrots, shallots, tomatoes, garlic, some serious chilis, oil, sweet canned milk and some coconut cookies as a treat. 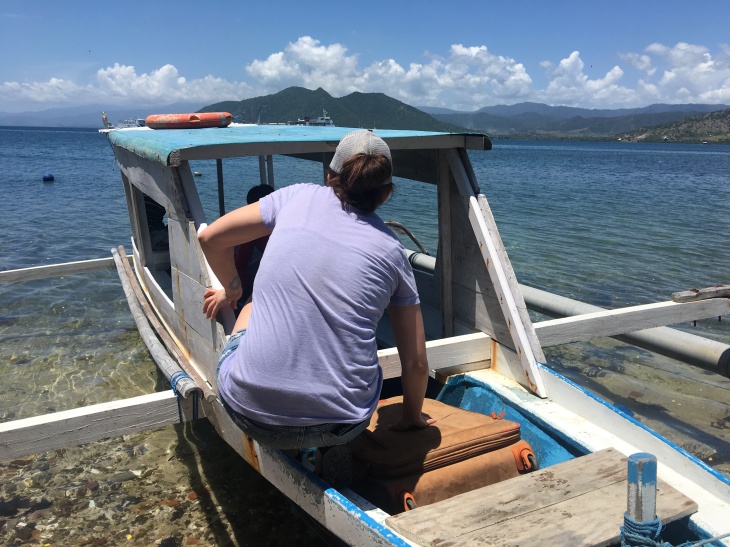 Boarding our 3rd boat of the trip so far. This one is only 10 minutes to Kenawa from Poto Tano 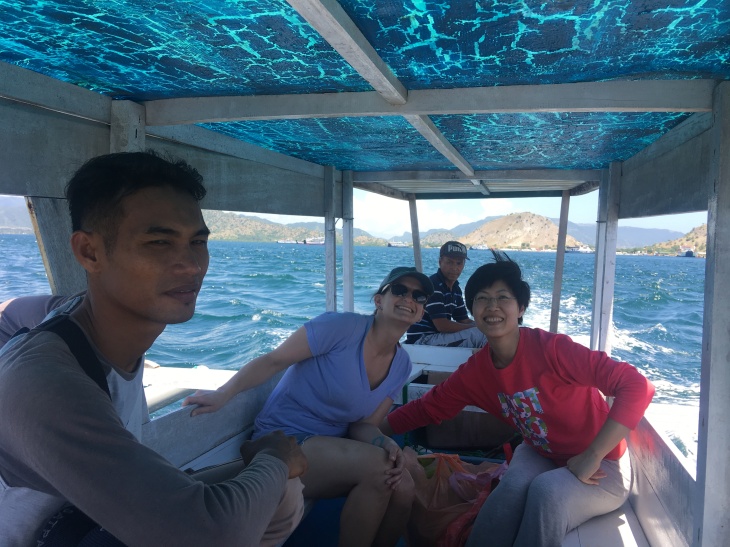 Lacy, Teri and Suji on way to Kenawa

We met Teri and Suji in the port. Teri is from China and will be the caretaker of the second Earthship on the island with us. Suji is a local who has worked with previous people from Earthship Biotecture. Another spicy lunch in port and we boarded another little runabout boat with outboard pontoons for the short trip over to Earthship Island / Kenawa. We could see the island’s recognizable shape from the road nearing the port so we knew it wouldn’t be long. My heart was already racing.

First glimpse of the island as we approach by boat 🚣‍♀️